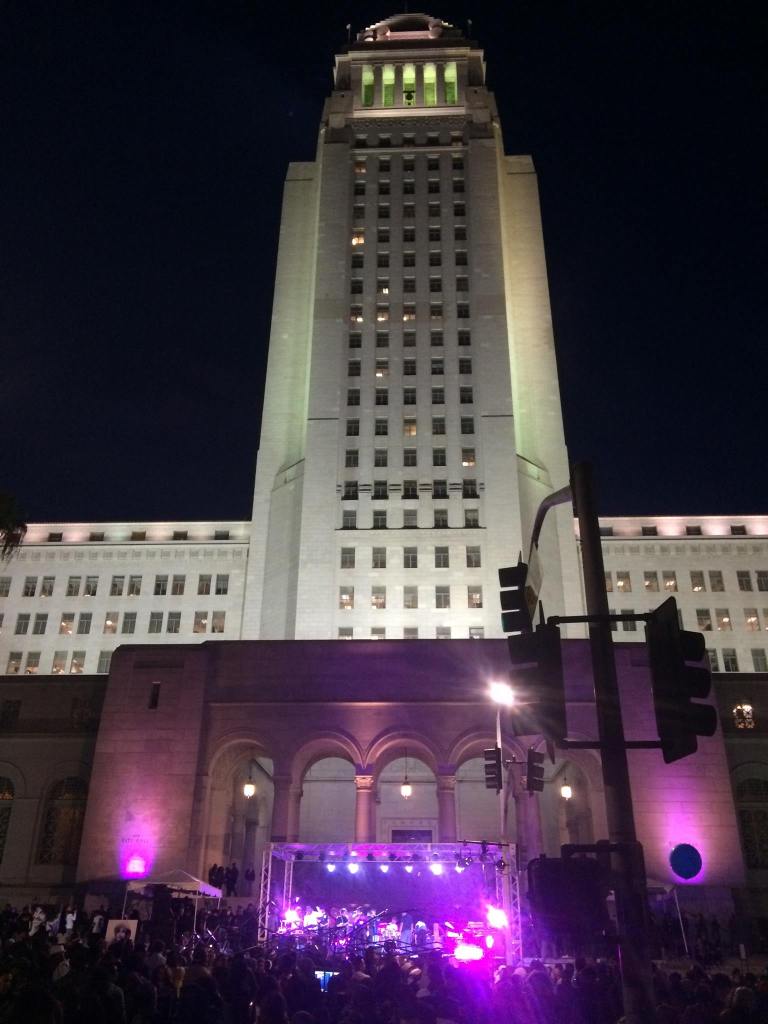 My baby brother first introduced me to Prince back in 1983 with the Little Red Corvette music video. I was playing with the purple Barbie Corvette that our father bought for me three years before when my brother insisted that I stop what I was doing so that he could show me something. He grabbed my arm, led me over to the backroom of the clothing store my parents owned, sat me down in front of the 13″ black-and-white television they set up for us, and together we watched a snippet of the music video being played on an obscure local public television channel.

My parents were fans of Michael Jackson’s Thriller LP at the time. Apparently, so was everyone else. Everywhere we went, Michael Jackson’s songs played. People would walk around town wearing one silver sequined glove or a red motorcycle leather jacket. My parents rented a retail space at a local strip mall to sell women’s clothing back then. To attract customers to enter the store, my parents would blast the volume of the stereo whenever Michael Jackson’s songs were played on air. “He just won all those awards,” my mother would exclaim whenever his songs came on.

Prince’s voice was very sensuous, sultry and moving, but I didn’t understand what I was feeling when I first saw him perform on television. I was probably 10 or 11 at the time. “Wait for it, wait for it,” my brother would plead to me as I watched and listened to Little Red Corvette. Then I saw it: the dance routine that everyone has come to expect whenever Prince performed on stage — that little dance he does across the stage where he does the splits while in high heels.

I was in love.

Purple Rain was released a year later, and everyone was talking about it at school on a daily basis. Classmates would boastfully tell me that their cool older siblings took them to the theaters to watch the movie and that it was the coolest thing ever. My brother and I watched the videos for When Doves Cry and Let’s Go Crazy whenever they were aired. Kids would either deem the cool kids as the Prince devotees, while the nerds and babies were put in the Michael Jackson groupies.

Soon, Prince was everywhere. He was on television, on the radio, in newspapers. He influenced the clothing styles that my mother would ultimately carry in her clothing store and the hairstyles that her best friend would experiment on me while she attended beauty school. People would gleefully await for Prince’s anticipated television performance at the American Music Awards, then talk about it the following day.

My parents thereafter reserved the store’s volume blasting of the stereo for when Prince’s songs aired.

Prince’s untimely passing on April 21, 2016 was very difficult for me.

No one understood that my life journey coincided with Prince’s music. I can honestly say that listening to Prince’s music was like listening to the soundtrack of my life. Prince had a song for every critical moment to date — from my childhood, my coming-of-age as an adult, etc. Some examples include:

Whenever I wanted to party with my friends, whenever I felt like giving up during a breakup, whenever I was lonely or sad, whenever I felt most happy, it was as if Prince carried me through life. Listening to his music is like traveling back in time to those days where I was learning to be comfortable in my own skin.

People in my inner circle were supportive towards me when Prince died. My husband watched the kids while I attended a screening of Purple Rain one Saturday morning. The local theater re-released the movie I was too young to see when it first came out in 1984.

I was surprised that I was one of four people in the theater that morning. Did Prince’s music not affect people the same way it affected me? It took me forever to procure my own tickets for this screening as the screenings before then were sold out within minutes.

Apparently the public already got their fix. 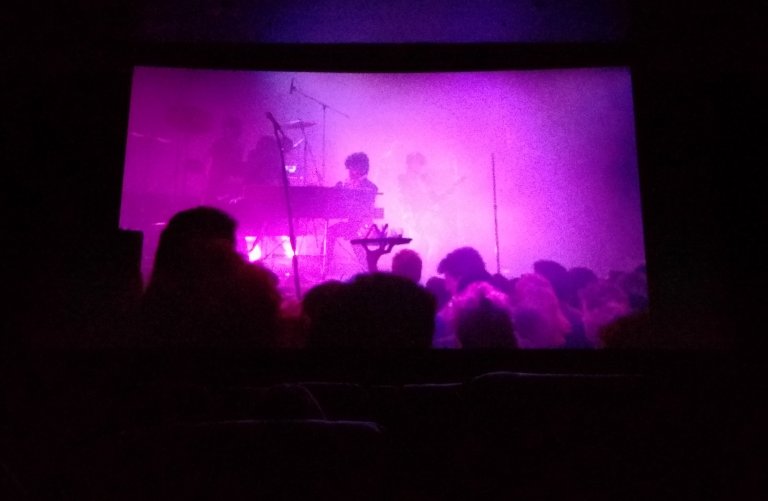 Meanwhile, my grief held on for 14 more days. I would stop whatever I was doing whenever anything Prince-related was featured on the daily news. I dug into my dusty CD collection to find whatever Prince music I had in my possession and played Prince’s music whenever I could. Fearing that the newly uploaded YouTube videos of Prince’s live performances and interviews would be taken down due to copyright infringement issues, I began to obsessively watch them at every free moment.

I began to feel self-conscious as I would listen to myself verbally share stories with my friends about how Prince was a huge part of my life, that his music brought back lots of memories, and that was why I was very sad. I feared that I looked insane for being so heartbroken over someone I have never met.

Luckily, other Prince fans in my beloved city shared in my grief, and the powers that be took notice. The City of Los Angeles and a local R&B station, KJLH, decided to host a free event to celebrate Prince’s life in music this past Friday. Thousands of Prince fans, local government officials and entertainers met in front of the steps of Los Angeles City Hall this past Friday evening to pay their respects to Prince. Here’s a short video of the performances created by a fellow Prince fan. 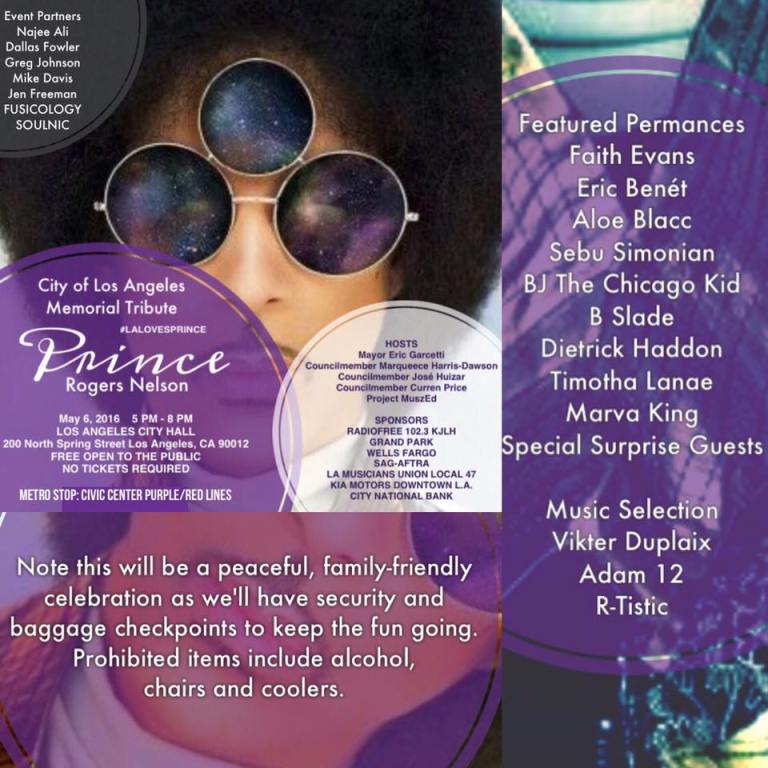 This venue was chosen because Prince’s Diamonds and Pearls music video was filmed here. It is also close to Prince’s former Glam Slam nightclub of the 1990s. 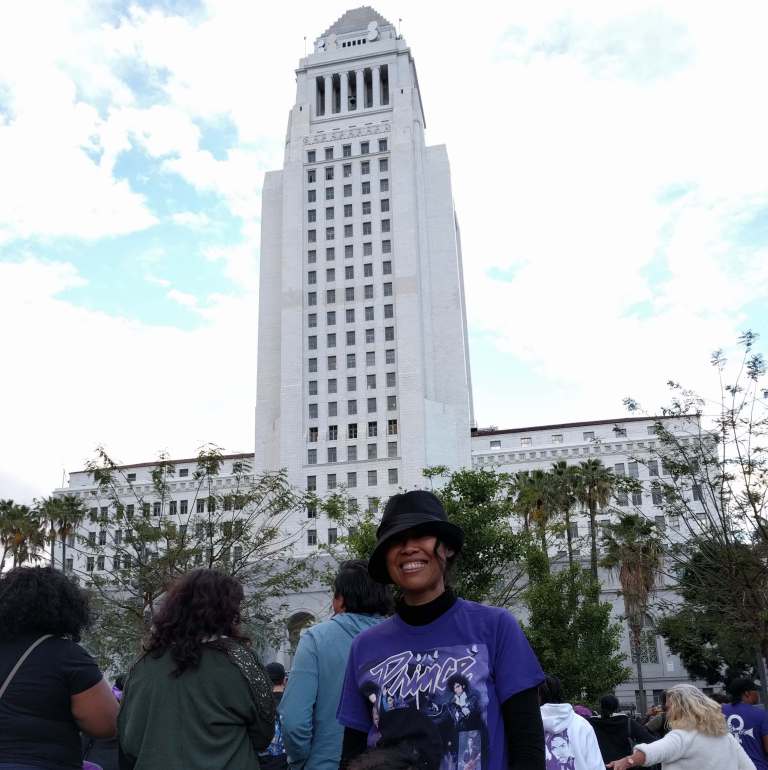 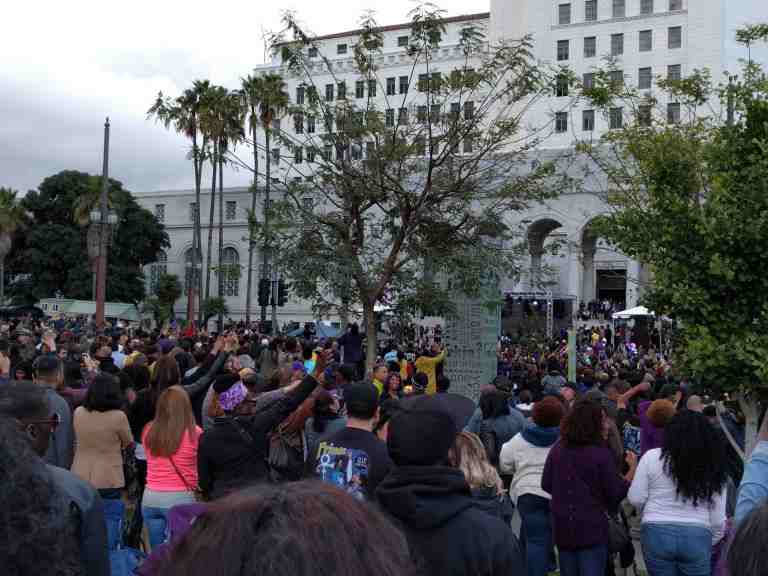 When Doves Cry infiltrated the air… and the doves were simultaneously released. This was truly a moving moment. 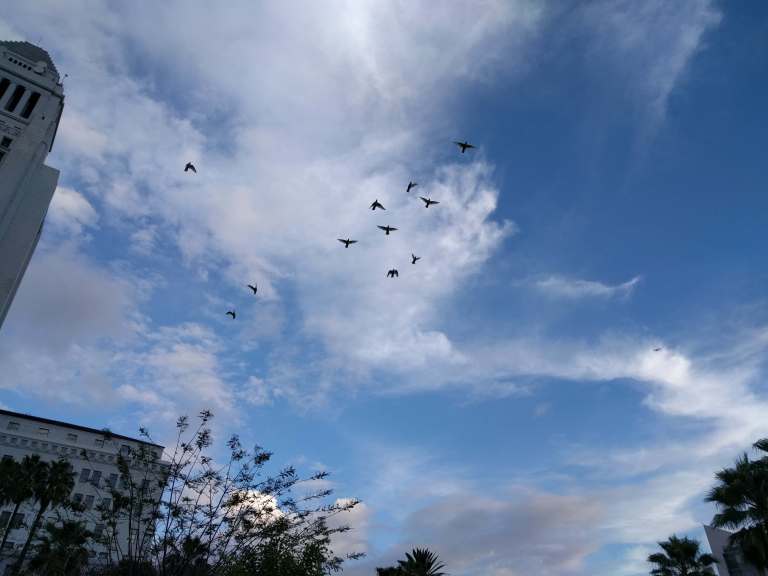 People from all walks of life attended: the elderly, the handicapped, the toddler, the stay-at-home parents, the Downtown Los Angeles professionals, out-of-town fans, fans of Prince’s music from the 1980s, etc. I even met up with a former co-worker and a fellow mommy friend of mine, both fans of his 1980s-1990s hits, at the Tribute Concert.

It was great to celebrate Prince’s contribution to the world in our beloved city. We all engaged in small talk with other Tribute Concert guests. Strangers would share their stories about the first time they experienced Prince’s music, his performances, etc. The consensus was clear. We were all very sad about Prince’s passing, some still not believing it is true, but because Prince created and performed a lot of his artistry in Los Angeles, we felt that this impromptu Tribute Concert was exactly what we needed to celebrate him. We all agreed that this event was needed so that us fans — the Purple Army, the Sea of Purple, the Violets in Bloom, the unofficial Prince Family — could have some sense of closure, some way of showing our love and adoration for him, in order to move on. 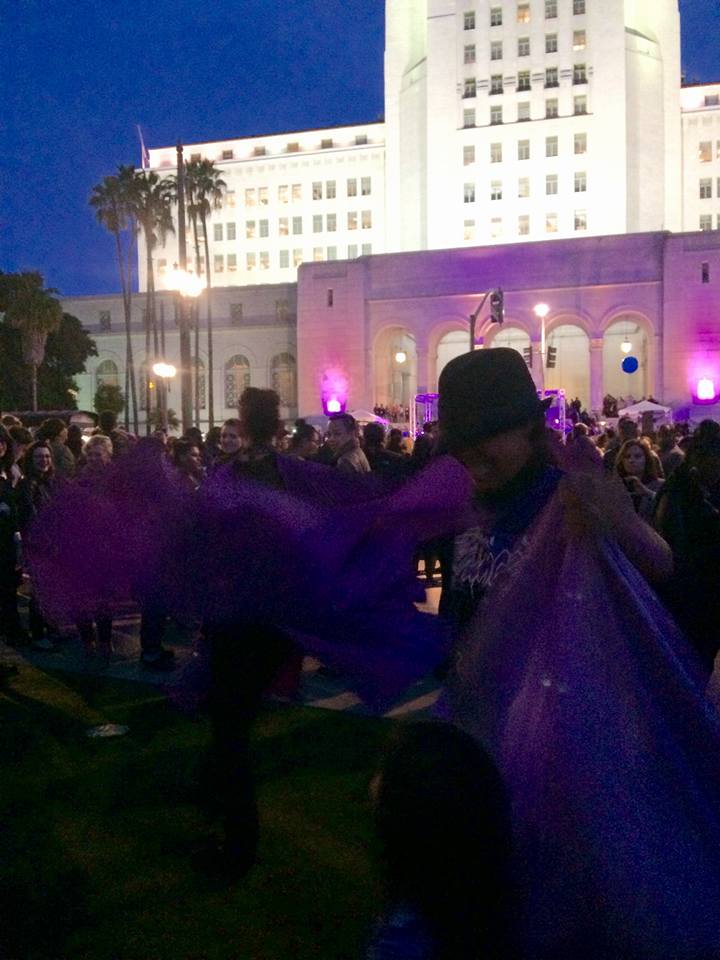 …and taking a photo selfie with a fellow Prince devotee. 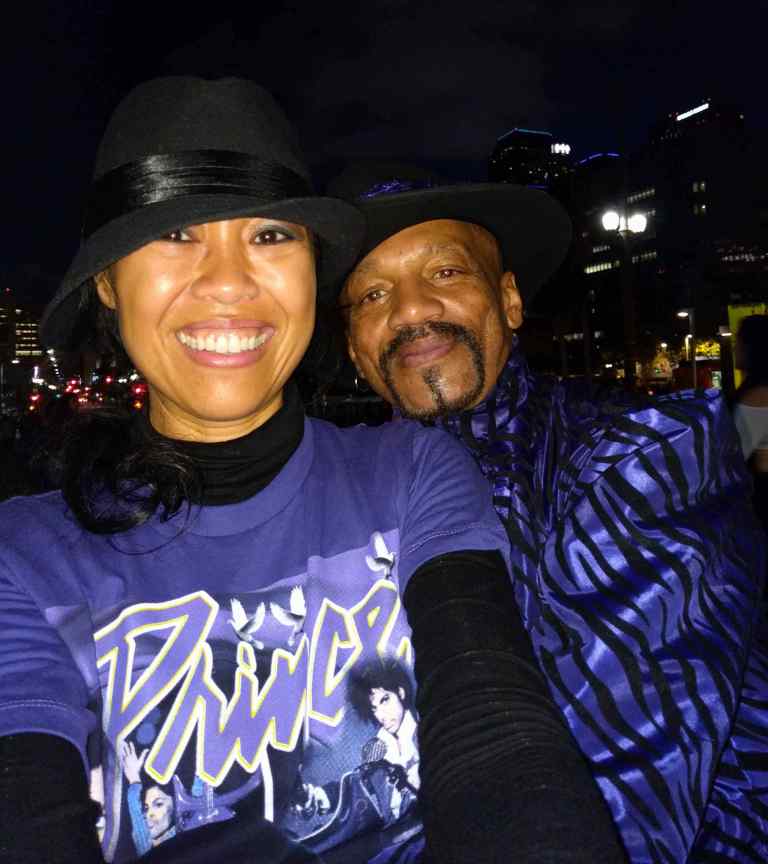 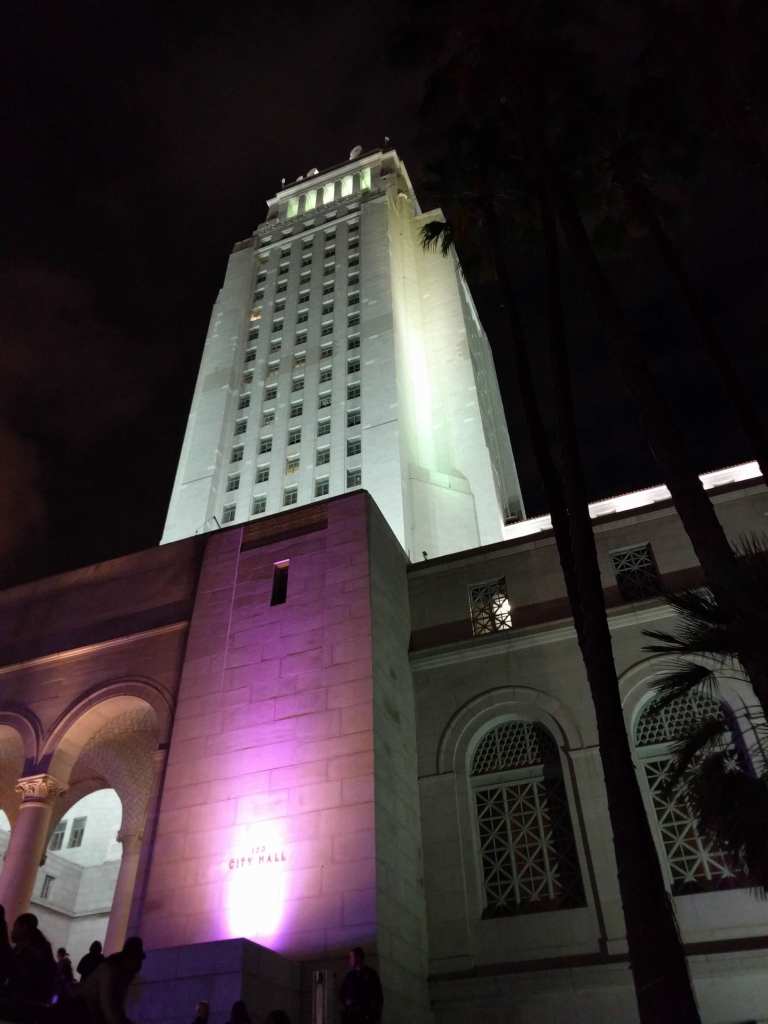 Prince was truly an inspiring person and the music experience he has given us is priceless. Everything Prince did as the hardworking individual who strives to become an even better artist/activist/person was what we as a society have lost. While I will continue to play the music I currently own, I will make a point to discover his later music (he apparently released a total of 39 albums) for as true fans know, Prince’s being and new creations are what will be missed the most.

As I left City Hall, I showed my friend that Prince’s former Glam Slam night club will have another tribute, and that we should go. It was then that I noticed that I won’t be anywhere near Los Angeles on June 18th, this time because of a family commitment that I must be a part of. An impasse with the Purple One, once again. 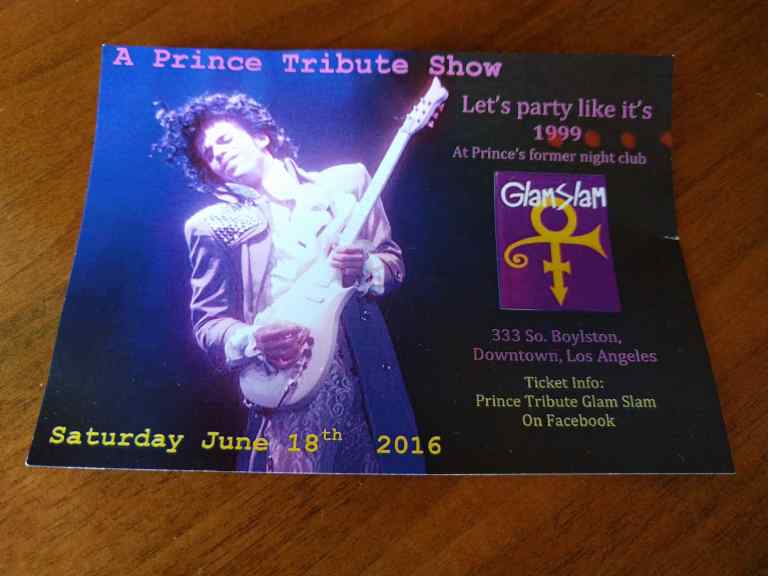