Named in 2014 by Americans for the Arts as one of the ten Best Businesses Partnering with the Arts in America, Brookfield’s cultural arm, Arts Brookfield, has commissioned two giant rabbits to be constructed for Intrude Los Angeles. They now join the original five rabbits that Parer created, each standing more than two stories high, the tallest sculpture measuring 39 feet.

The artist constructed the giant rabbits as a social commentary in the hopes that while families and art enthusiasts appreciate these temporary “intruders” as works of art, that the same folks be mindful of “every species’ larger-than-life impact on their surroundings”. The message of intrusion is conveyed as actual rabbits have indeed wreaked havoc on her native Australia’s ecosystem, when white settlers brought them to the continent back in 1777. “I expect people will be drawn to the rabbits’ playful appearance, and I hope they will also take the time to understand the deeper meaning in the work and discuss how our actions impact the environment.”

I was able to coerce some mommy friends, their kids and one of my kiddos to join me as we trekked east to Downtown Los Angeles at the opening night of Intrude Los Angeles at the Fig at 7th Plaza location. To give you a reference of how big these bunnies are, here is a photo of my daughter standing underneath the belly of one of the bunnies.

While waiting for one of my other friends, I decide to have some photo fun.

…hunting for rabbits, or witnessing the rabbit crushing mankind?

…playing off my daughter’s curls and fashion choices with the installation:

…self-portrait of me as Ms. Bugs Bunny: 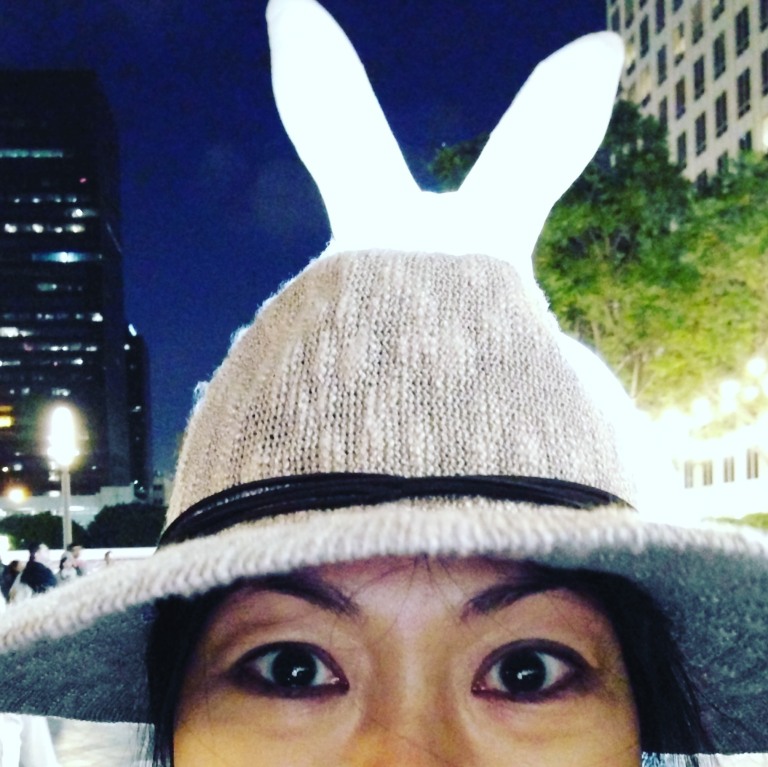 Here is a view of one of the bunnies during the mid-afternoon: 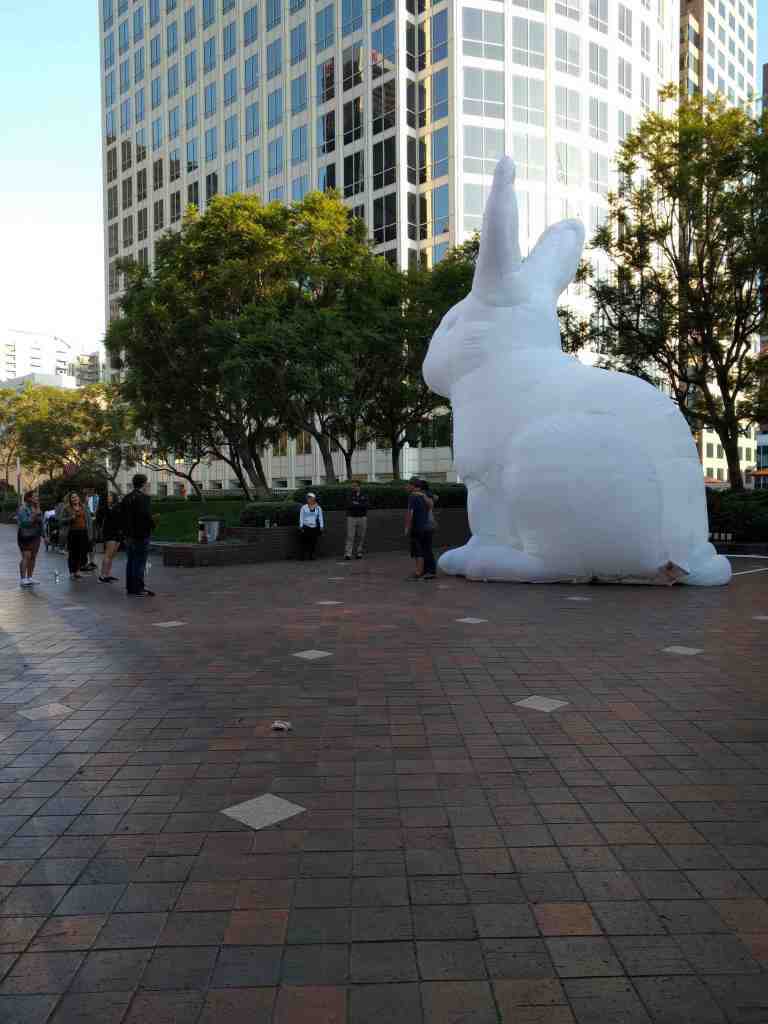 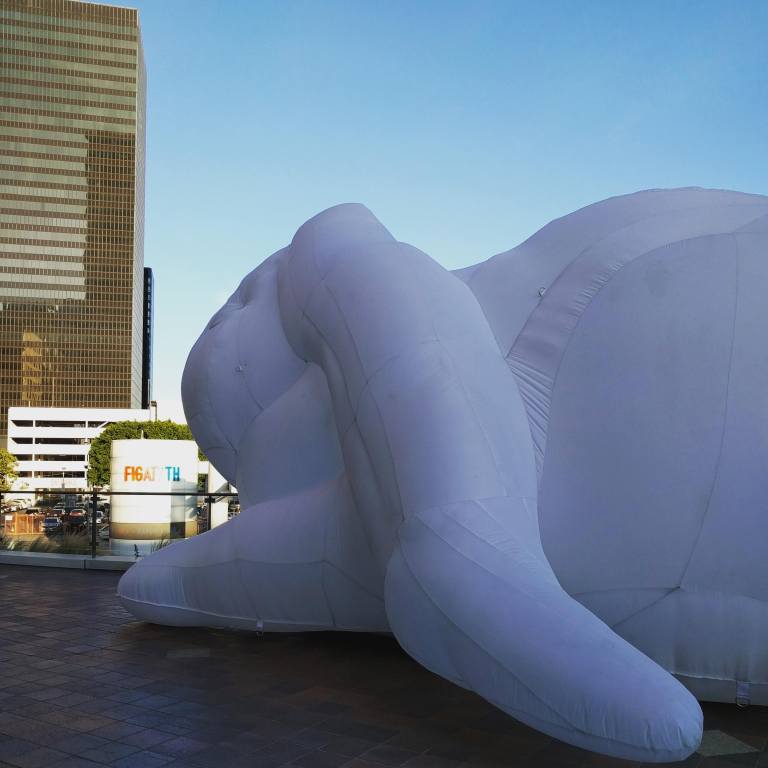 Here’s some photos during twilight (the magic hour for most photographers): 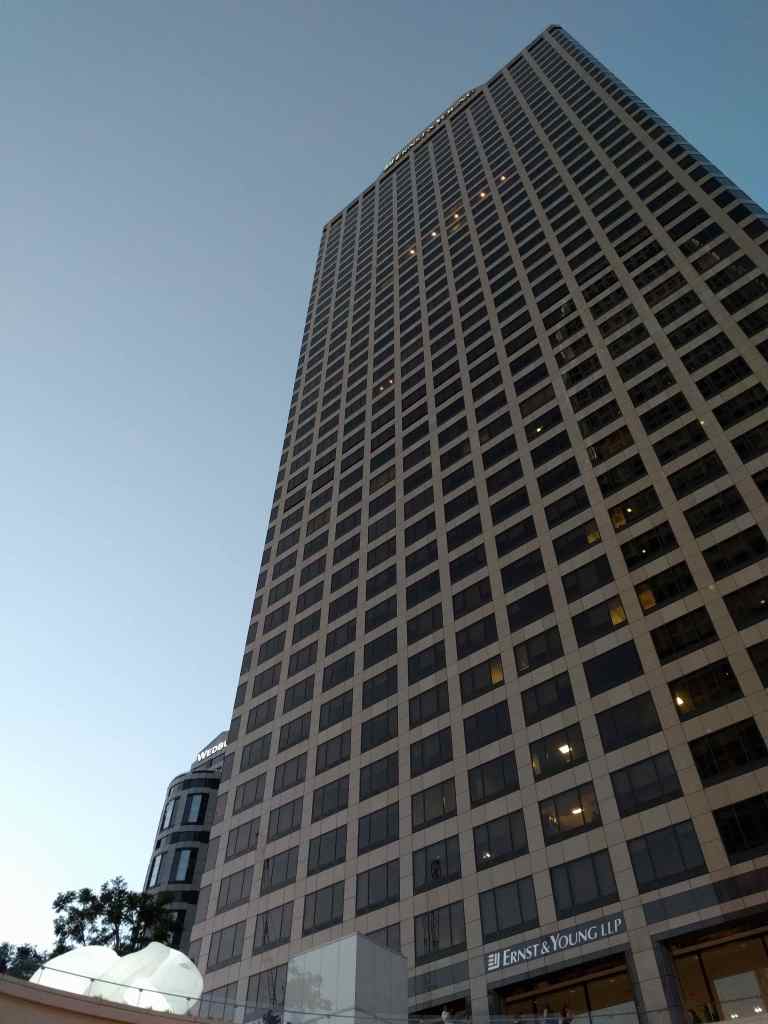 Here’s some photos when the evening finally arrived (also when huge crowds began to form); this was the best time for visitors to enjoy the illumination: 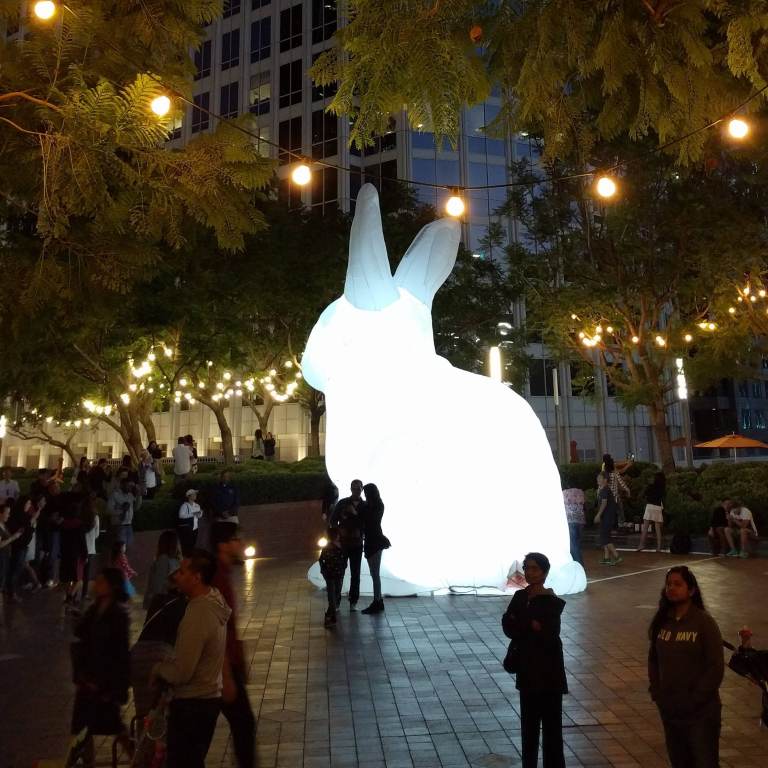 We found ourselves mesmerized by the enormity of the bunnies, so much so that we visited only one of the three Brookfield locations housing the temporary art installation. It was for the best, though, because had we traveled from one location to the next, we would not have been able to fully appreciate how different the giant bunnies looked as the evening progressed. We also avoided having to fight an unusual amount of Sunday traffic between this venue to the others located north of Downtown Los Angeles’ Bunker Hill; I later found out that the local Catholic boys high school’s yearly baccalaureate ceremony was also occurring at the nearby Cathedral of Our Lady of Angels, so that, plus the other art enthusiasts who chose to visit the other bunnies at the other two locations, caused the unusual gridlock.

The curators promptly ended our evening at 9:00 p.m. when they deflated the bunnies and turned off the bunny lights. Goodnight, bunny:

Not to worry, school is out at week’s end, and I was planning another day trip to Downtown Los Angeles anyway, over at the Japanese American National Museum in neighboring Little Tokyo, for the one-day Mixed Remixed Festival, a free film, book & performance festival celebrating stories of the mixed and multiracial experience. I may be able to squeeze in a late afternoon visit to the Bank of America Plaza and neighboring Wells Fargo Center, this time with both kids in tow, to visit the original five giant bunnies before they leave Los Angeles this weekend.

As an aside, during my Intrude visit, one of the Events personnel at Fig and 7th handed me this postcard, inviting my family, friends and me to come back this Friday to take part in the venue’s Special Event, Quiet Disco Under The Bunny Glow. 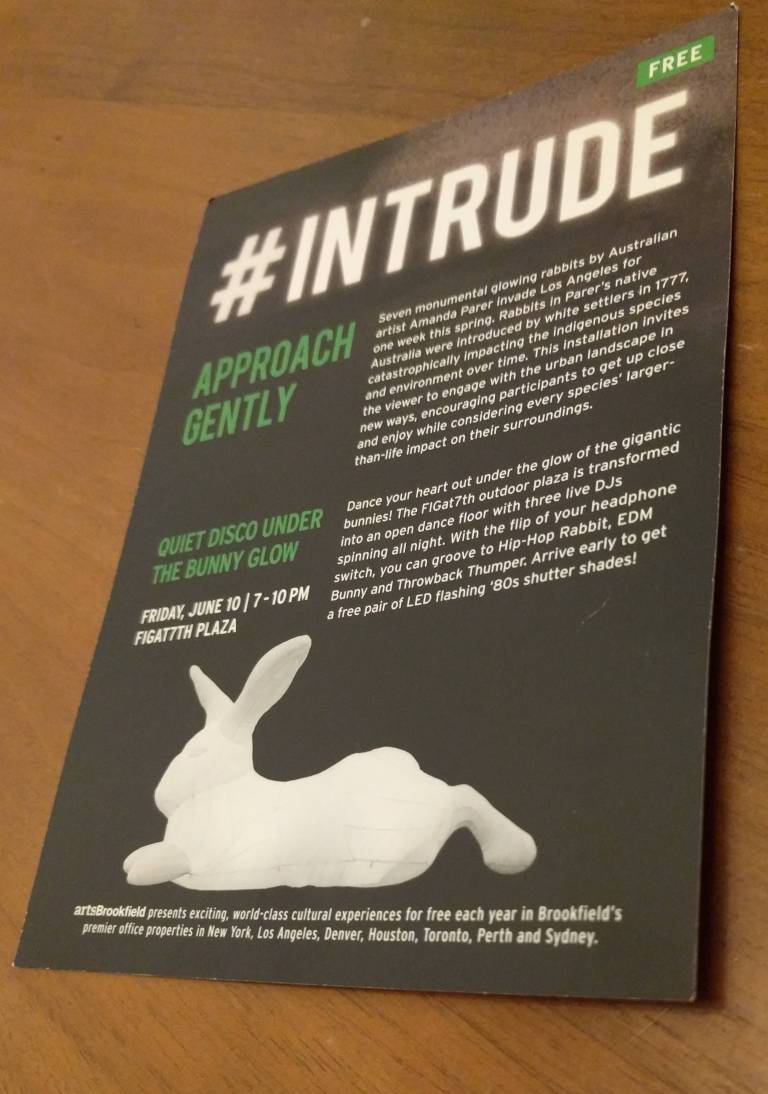 So much fun to be had, but so little time! What to do, what to do?