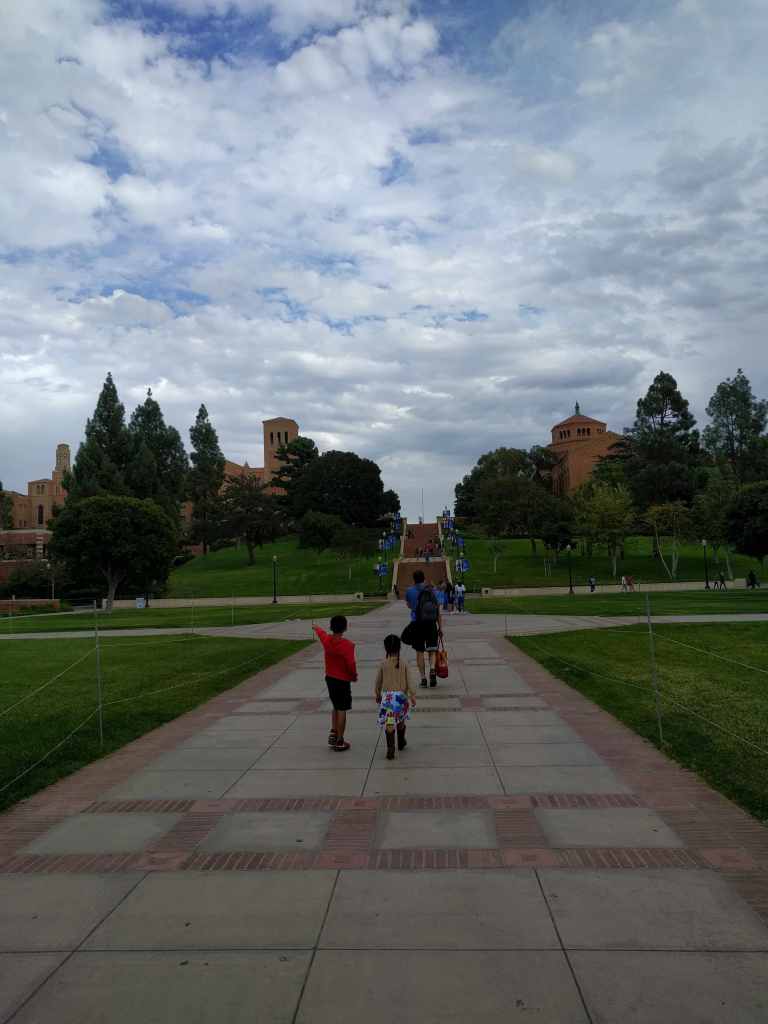 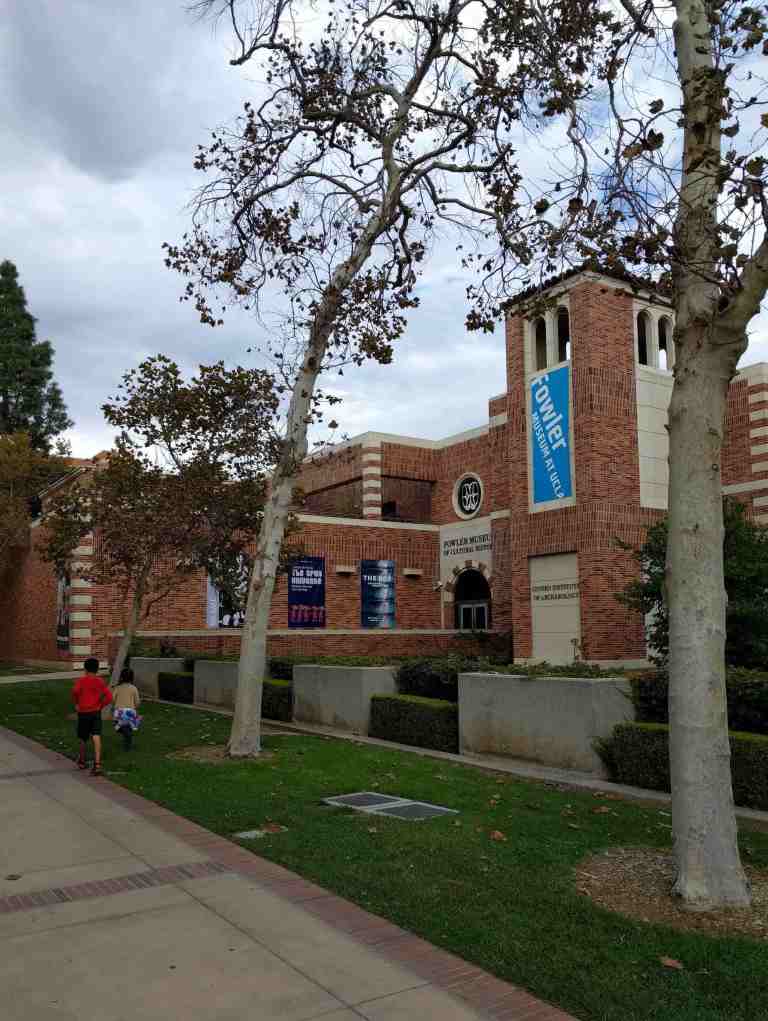 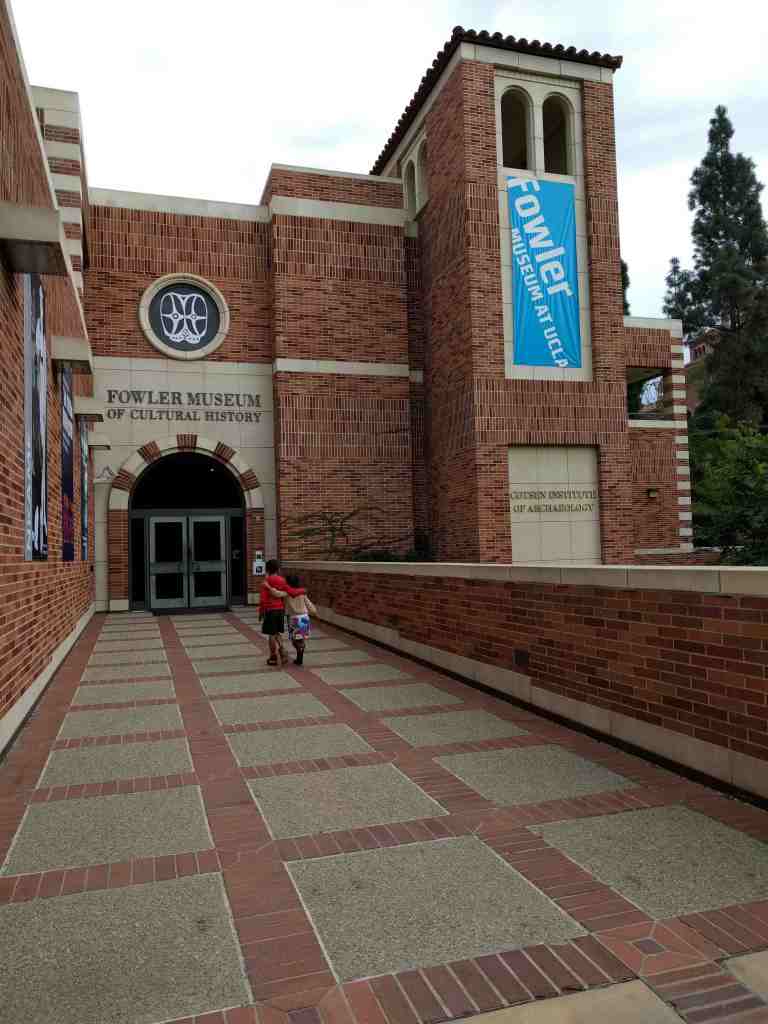 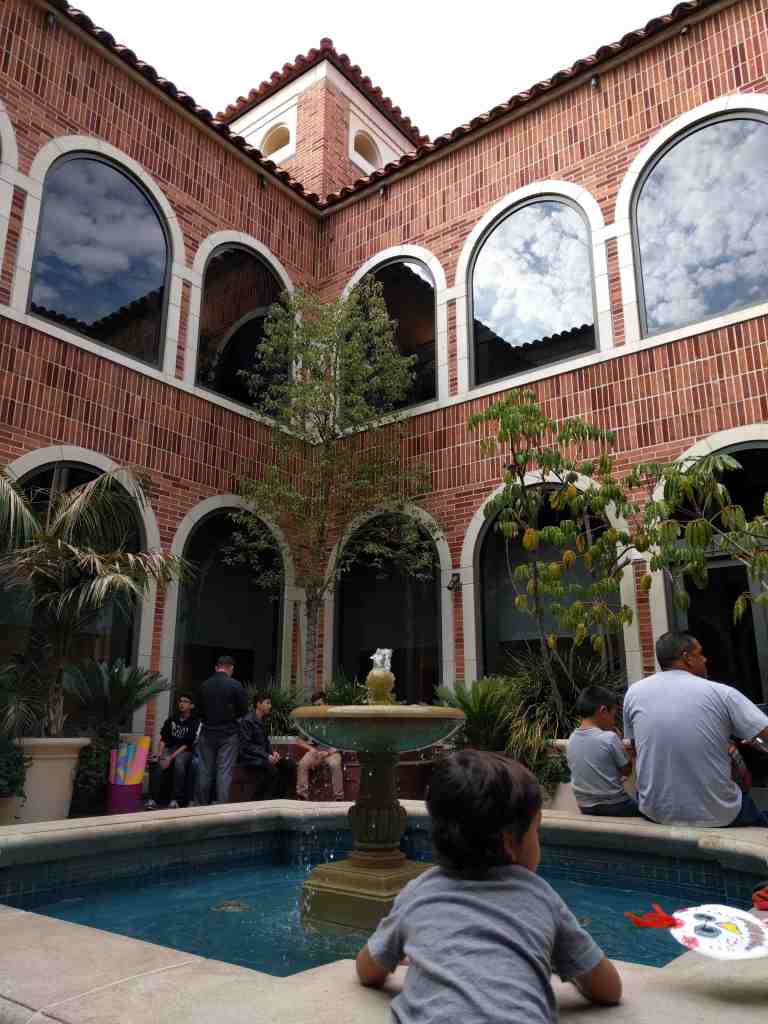 Dia de Los Muertos, a Mexican holiday wherein family and friends come together to pray for and remember friends and family members who have died, is often celebrated on multiple days leading up to November 2nd, the actual “Dia de Muertos” celebrated by people of Mexican ancestry living in Los Angeles and other large Mexican communities.

The Fowler Museum hosted its monthly family program, “Family Jam: Celebrate Dia De Los Muertos” this past Sunday afternoon at its Inner Courtyard, wherein we were treated to a lively mariachi performance by La Victoria, the local all-women mariachi trio.

A meet-and-greet session with the performers soon followed wherein the audience was able to ask questions about the trio’s next performance, how they started, etc. I was one of the folks who asked about the very unique-looking string instrument. I later found out that it was a mariachi bass, better known as a guitarrón, that it was made in Mexico and that the performer owned it since 2003. She was even kind enough to let my children and me, as well as other members of the audience, play with the unique guitarrón strings. 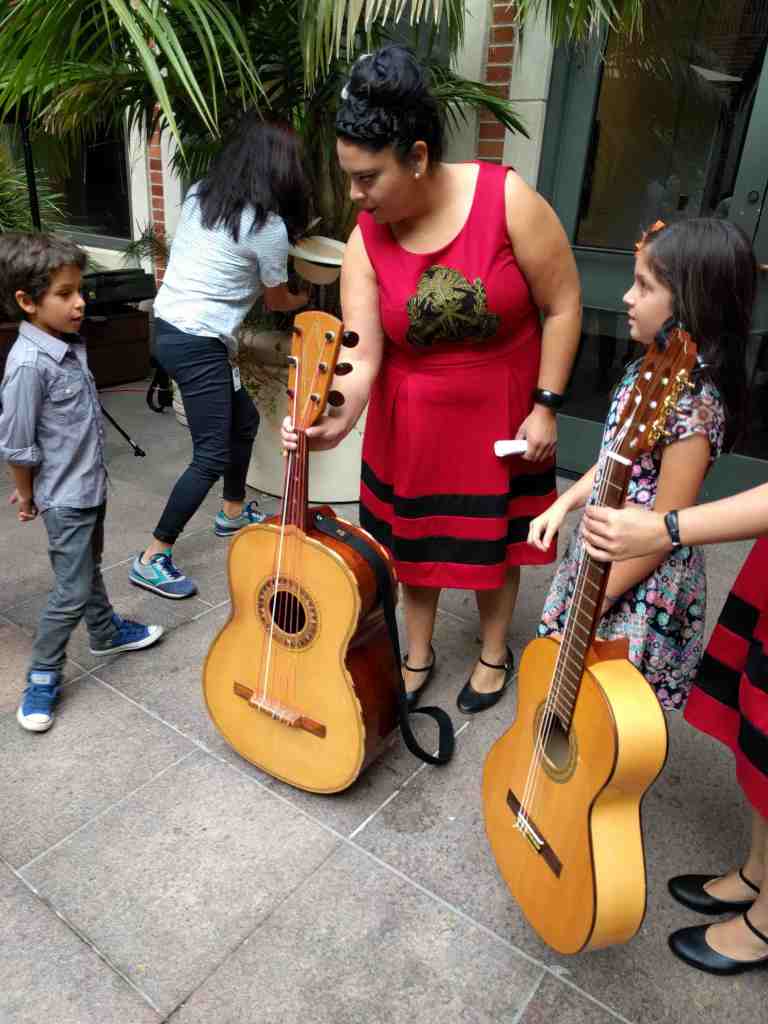 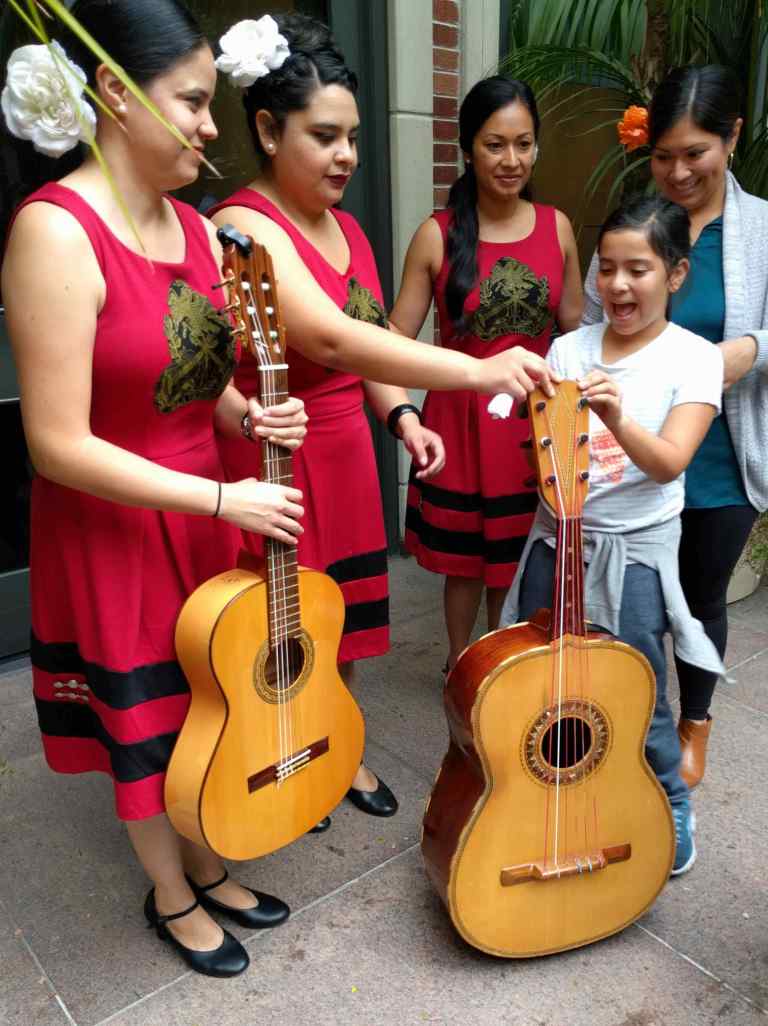 Arts-and-crafts opportunities of decorating calavera (skull) masks with paints, glitter, markers and pastels onto either pre-printed print outs or paper plates, as well as creating paper marigolds (Flower of the Dead) allowed families to learn about the significance of these Dia de los Muertos symbols. 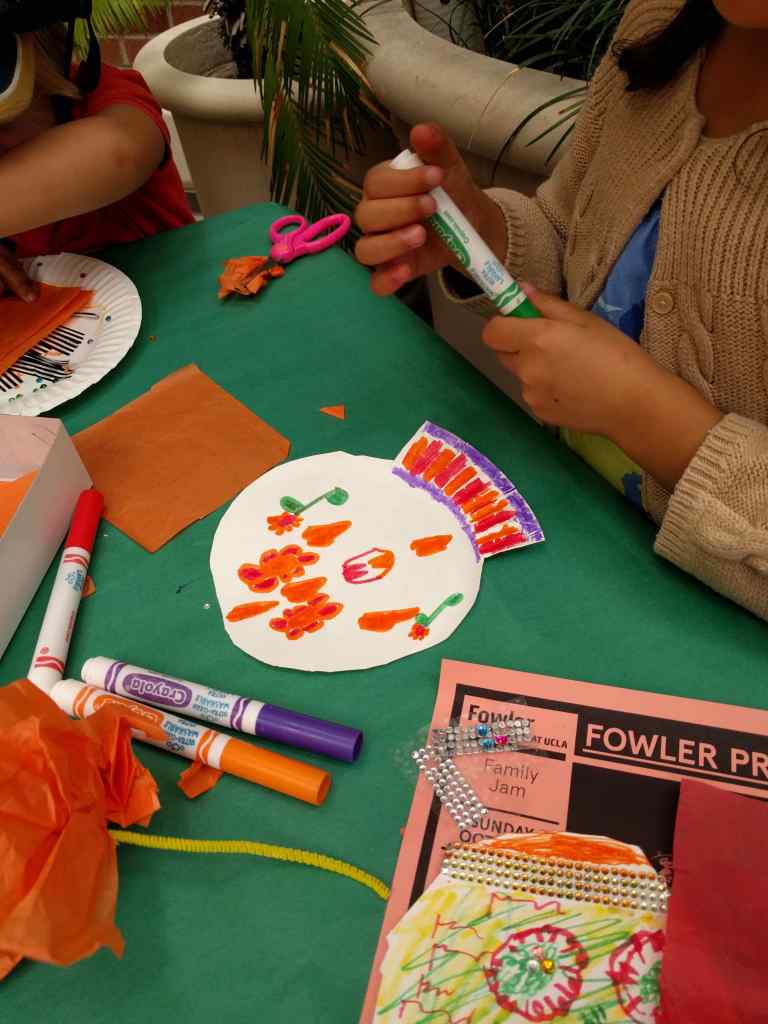 After the Family Jam session was over, museum visitors were invited to tour gallery space. I found it interesting that the Black With Drop Red Cuban Poster Work exhibit, wherein cinema posters created by contemporary Cuban graphic artists encircled the interior walls of the hallways. I later learn that this exhibition had nothing to do with the Dia de Los Muertos celebration. I enjoyed looking at them anyway, so that is why the exhibition is tangentially mentioned here. 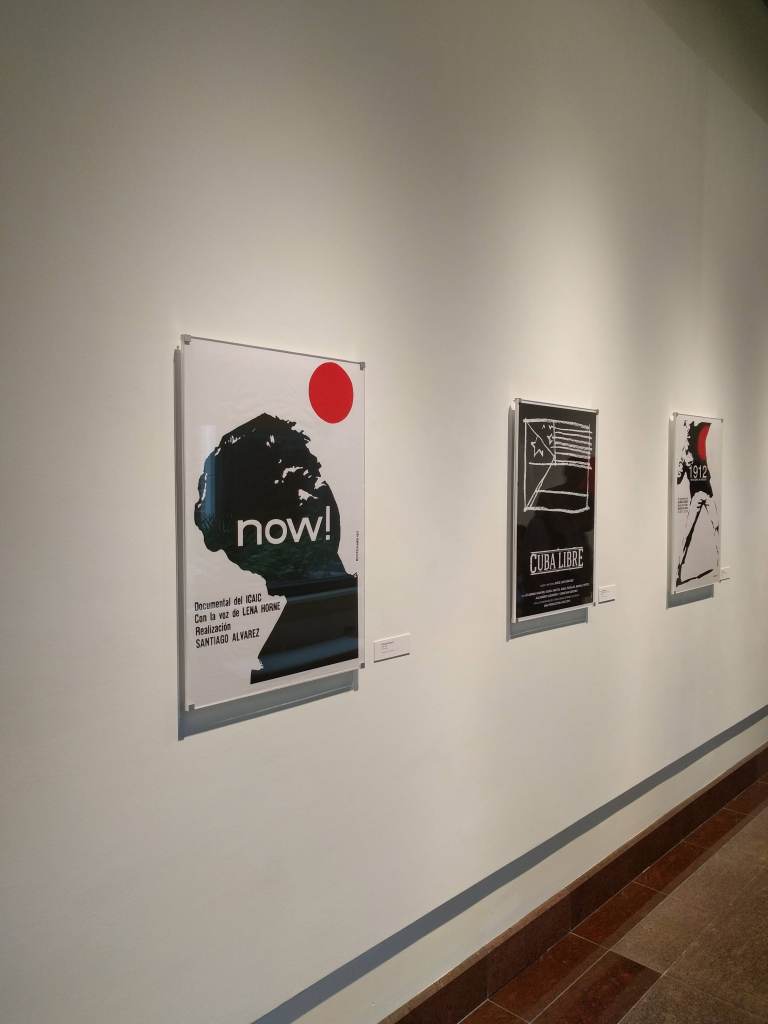 and a photo of the Memorials and Transcendence display of Intersections:

Fowler Museum is an impressive museum to which I have to admit its venue size and exhibition displays I wrongfully underestimated. Fowler offers free admission, has awe-inspiring new exhibits, such as the Nkame, the Belkis Ayón retrospective, and The Box Project: Uncommon Threads. Everything on gallery display are presented so that museum visitors can get up close and personal to each piece and admire all the artwork at his or her leisure.

If you happen to be at UCLA one afternoon and have a couple of hours to relax, please check out Fowler Museum. You won’t be disappointed.